Nobility at our Booth. The Fantasy Basel has been a blast.

We met a lot of awesome people, got great feedback for our comics and also a lot of great input for our story, as we held the first vote at our booth and got some hilarious responses. Our favorite reason why mankind should not be preserved: “Not enough space in space for yet another race”. Thank you Nacho for your great slogan. This will look very nice on protest signs of an angry alien mob. We are still busy with the after math of the event, but we will soon release all the results and also provide a way for further online votes. Until then, schlaaab! 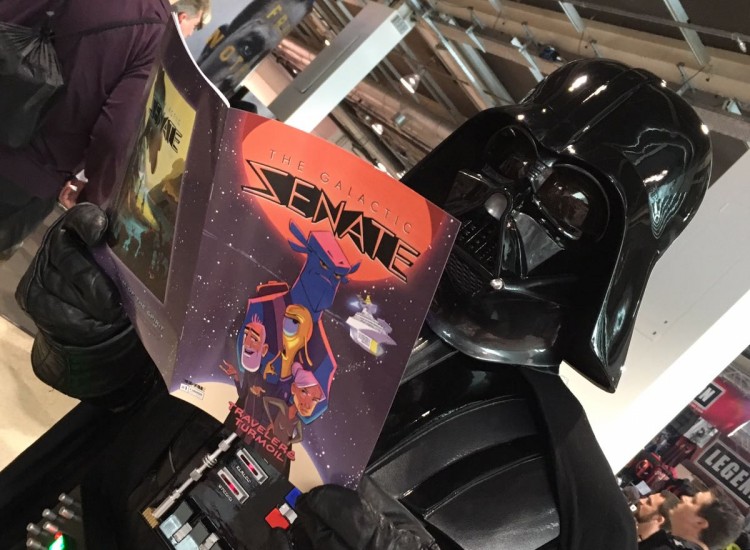 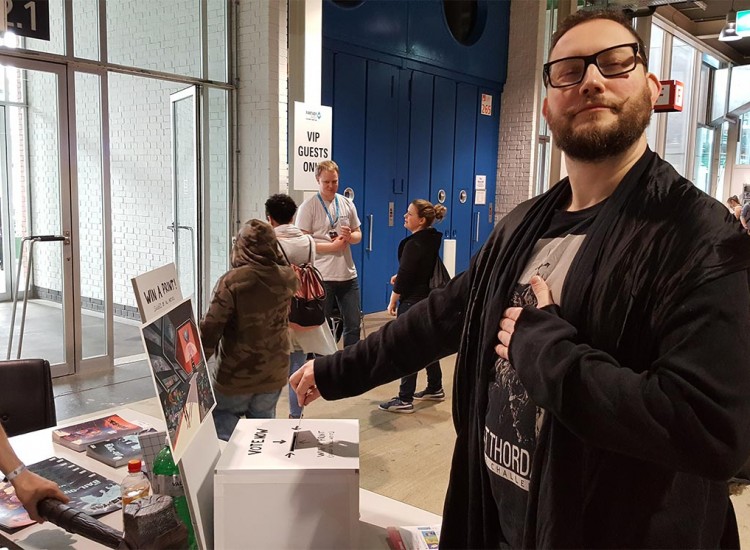 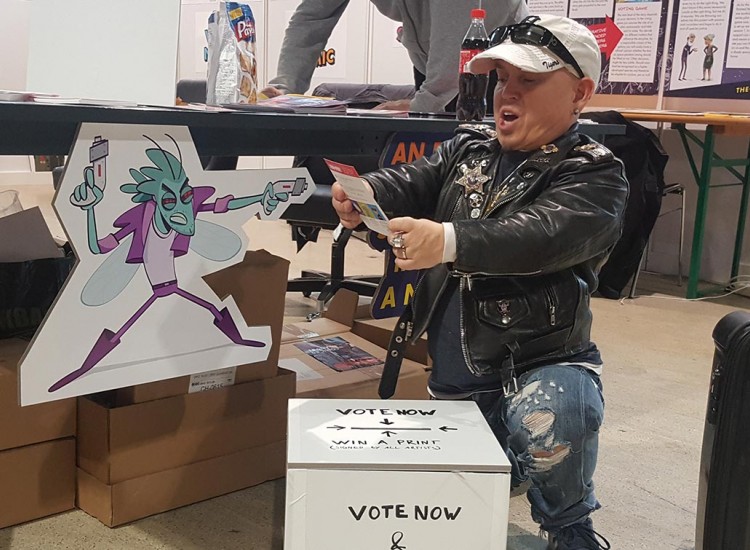 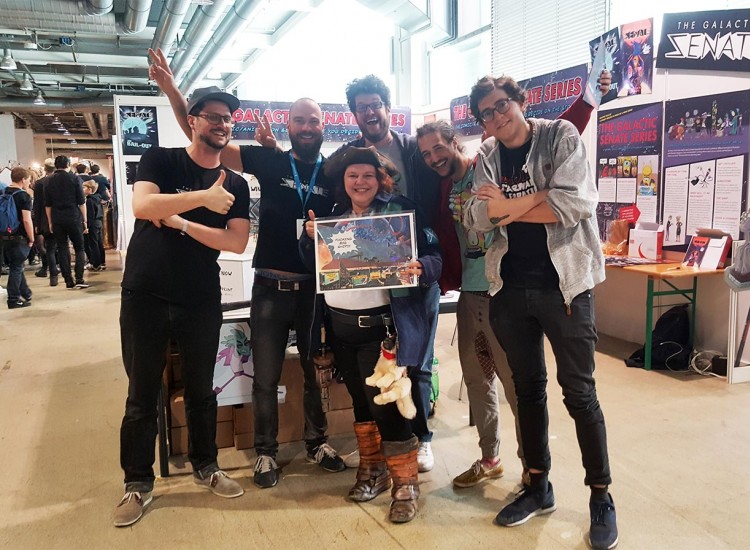 An epic tale of a shady species in need of a new home.

A story told through different channels.

A narrative influenced by readers and viewers.

Read everything about the project on our site. Get the comics in our shop and subscribe to the galactic newsletter. Your support means the world to us.

THE STORY HAS BEGUN

Planet earth teeters on the brink of collapse. Facing the obviously self-inflicted downfall, mankind has gathered in an unprecedented unity and built a gigantic mother ship to debark in search for a new home in the galaxy. This is where the Galactic Senate steps in.

After the initial shock, mankind might not be the pinnacle of evolution, things get even worse. Read everything about the beginning of the end in the first comics.

WHEN IS THE NEXT RELEASE?

As for the middle of 2017, we are working towards the animated series pilot episode and the voting game. Once the whole thing is set up we are ready to launch season 1. In order to do so, your support can make a big difference and means a lot to us. One of the most valuable things you can do is to tell everybody about us. After all, what are we getting out of it, if nobody knows about the end of the world.

The comics tell the backstories of the characters and shed light on the dubious doings in the galaxy. Here you get some close-up details on who is who and what they are up to. The different plot lines in the comic build up to the next animated series episode.

The episodes of the series form the core of the story. They focus on the main characters struggle to save humanity from extinction. This is when the shit hits the fan and the story gets propelled to the next level.

The next level of the story depends on your decision. In the voting game you assume the role of an alien ambassador and take part in votes. You decide on different matters that influence the storyline. As a responsible citizen of the Galaxy you will surely have a refined opinion whether the ban on space plankton mining should be lifted or not. Other decisions might be less subtle. Should mankind be recognized as a higher developed species and therefore be eligible for asylum? Don’t miss the first online vote and subscribe for the newsletter now.

Join our community
and spread the word

You can get involved on many levels and help us to get everything going.

By buying the comics and other stuff in our shop, you directly support the project. Subscribe to our newsletter and take part in the voting system that influences the story universe. (it will be available very soon, but you can alread sing up, so you won't miss it :-)

And most importantly, if you like The Galactic Senate, tell everybody about it. Share as if the end of the world would depend on it. We appreciate it very much.

The senate is a crowd of maniac, bullying, attention seeking aliens awaiting the next chapter in mankind’s disastrous attempts to leave their kaput planet.

For every comic issue and for each animated episode we are looking for new characters of national and international illustrators and designers.

If you are interested in becoming a guest artist, check the design specification in the PDF and send us your weirdest and most alien alien.

Maybe your alien will become a key player in the future.

Become part of the artist community:
Design and submit your alien character!

Check the details in the design specification PDF.

Use the form to submit your alien design.

The crew of character designers and artists is growing.

Meet the Earthlings behind the Galactic Senate

Galactic Studio is a network of creative minds. Storytellers, filmmakers, character designers, illustrators and other muddleheaded spirits. Our goal is to build an international network of artists and doomsday enthusiasts to work together on this creation of our own choosing. 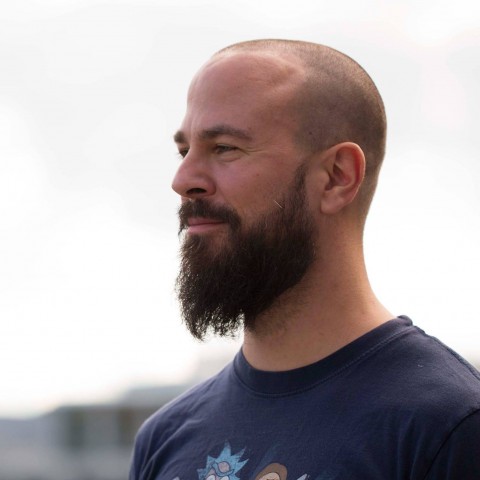 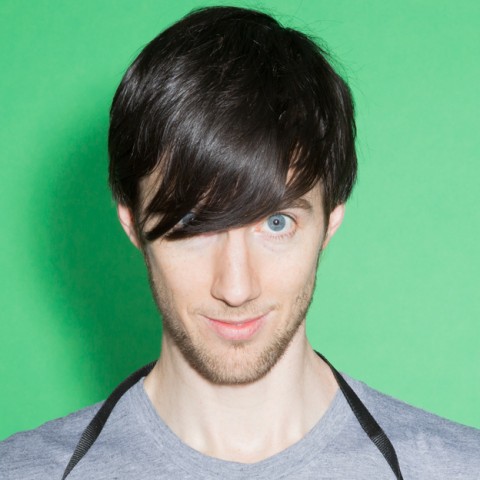 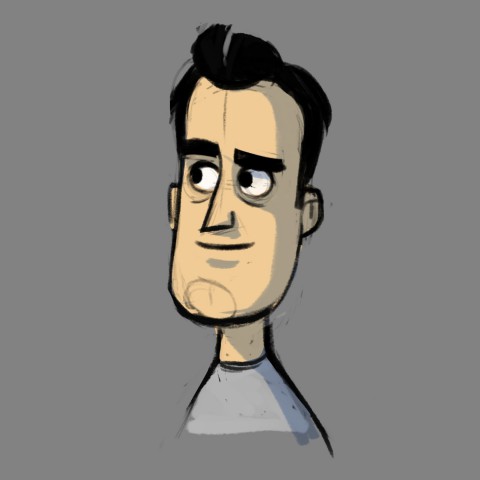 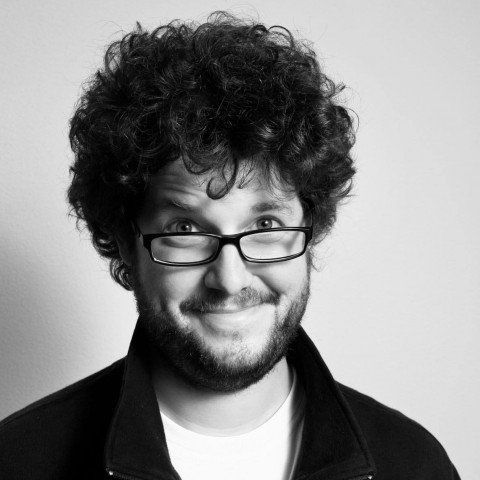 Buy our stuff and help us to get the project started!

Comic Issue #0 and #1 now availbale in our shop. This is how everything begins. Order your copy today. 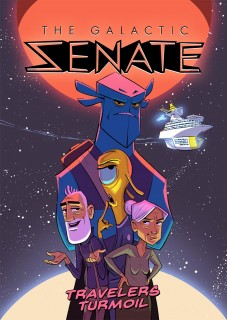 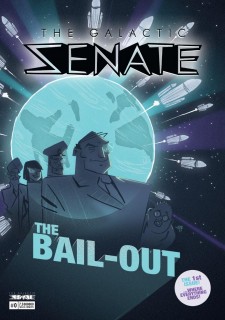 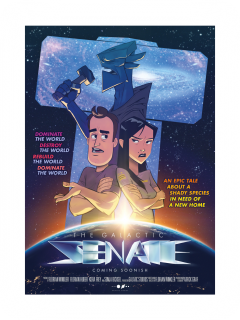 Get our limited edition series poster